e, also called Euler’s Number after the Swiss mathematician Leonhard Euler, is a very important constant that comes up in many different places in mathematics. The numer e was discovered by the Swiss mathematician Jacob Bernoulli while studying compound interest where e arises as the limit of (1 + 1/n)n as n approaches infinity. e can also be calculated by summing:

The constant e appears naturally on the exponential function, which models growth. Hence, the same way that the constant π appears in everything that is round, the number e appears in everything that grows: size of baby animals, leaves in trees, bacteria populations, spreading of diseases, spirals in flowers and snails, radiactive decay of elements, money invested in a bank, processing power of computers… Everything that grows the faster the bigger it is follows an exponential law, and contains the number e.

e has an infinite number of digits. We prepared a website listing the first 60.000 digits of e and help you find your birthday in it:

If we assign a number to each letter in the alphabet we can even find your name within the digits of e, along with the complete works of William Shakespeare, the ending of Game of Thrones (spoiler alert), the full text of the Wikipedia from the year 2030 or what you’ll have tomorrow for breakfast…

Happy e-day to you! 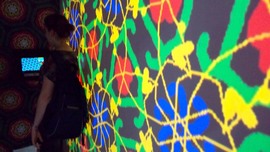 In Tecopólis, a huge science and technology fair in Buenos Aires, a 4 x 4 x 3 meter projected and interactive Morenaments Room invites all visitors to play and create own wallpapers! See this video for some details on the IMAGINARY installation at Tecnópolis: https://www. youtube.com/watch?... END_OF_DOCUMENT_TOKEN_TO_BE_REPLACED

SURFER is presented as part of a big IMAGINARY installation in Tecnópolis, Buenos Aires Argentina. For the first time a half dome with 7.5 meters diameter has been constructed to host 3 SURFER touch screen panels and a gallery of algebraic surfaces. The dome features coordinate axes and is the eyecatcher of the “Pabellón de Matemática” of Tecnópolis 2012. END_OF_DOCUMENT_TOKEN_TO_BE_REPLACED

At the Oberwolfach IMAGINARY workshop in July 2012 it was decided to put a focus on web development. For the program SURFER it is planned to offer a web version, i. e. a Java ray tracer of algebraic surfaces in form of a browser applet. This applet can the be easily controlled in the browser html environment through javascript commands. The user interface can... END_OF_DOCUMENT_TOKEN_TO_BE_REPLACED