The real projective plane is a two-dimensional manifold - a closed surface. It is gained by adding a point at infinity to each line in the usual Euklidean plane, the same point for each pair of opposite directions, so any number of parallel lines have exactly one point in common, which cancels the concept of parallelism. The union of all points at infinity forms a line.

Imagine sewing the edge of a Möbius strip, which is just one closed curve, to the boundary of a disk…

I created the pictures using the free software POV-Ray - Peristence of Vision Raytracer. Except for the first Boy Surface, which I drew by hand. 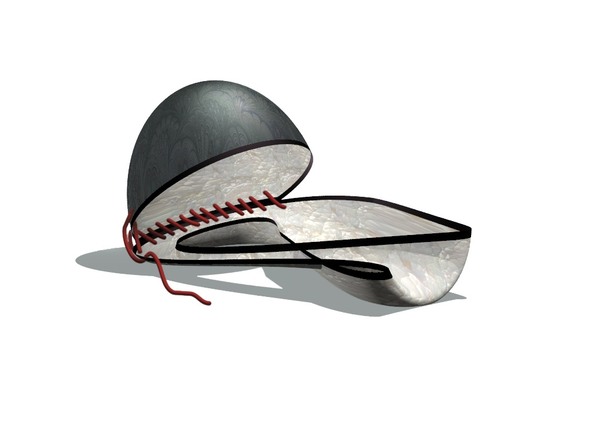 Can you bend your mind?

Imagine sewing the edge of a Möbius strip,
which is just one closed curve,
to the boundary of a disk…

Well, a disk is topologically seen the same as a hemisphere. The Möbius strip used in this image is the bottom half of a Klein Bottle. 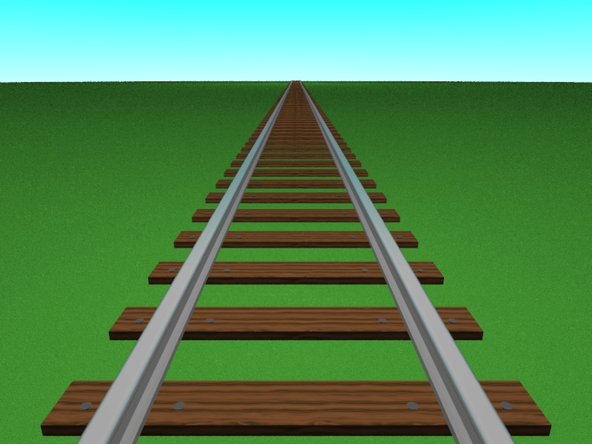 Why is it called 'Projective Plane'?

To explain the origin of the term Projective Plane imagine two parallel lines in the real plane. The example of the rails of a railroad track works well (even though they are not in a plane). They seem to intersect at the horizon. This independently motivated Johannes Kepler and Gérard Desargues in the beginning of the 17th century, later also J. V. Poncelet, to extend the real plane by new points at which parallel lines intersect. 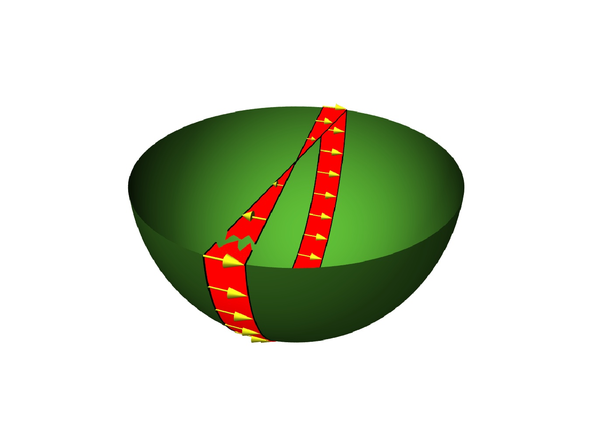 A hemisphere, where diametrically opposite points of the equator are identified, serves as a model for the real projective plane. A closed surface is non-orientable if and only if it contains a closed curve along which orientation is reversed – a Möbius curve. A small neighborhood of a Möbius curve is a Möbius strip.

The image shows a Möbius strip within the real projective plane by following a projective line. The line is closed because of the antipodal equivalence relation, and orientation is reversed. Therefore the projective plane is non-orientable. 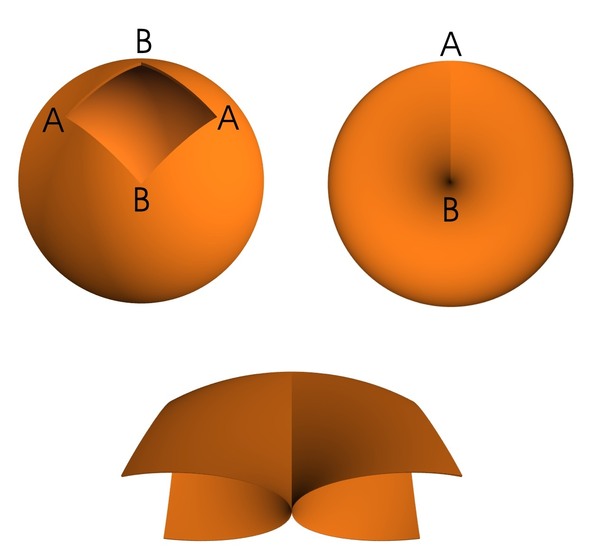 We are now trying to actually connect the edge of the hemisperical model of the real projective plane.
Imagine to deform the hemisphere like shown in the upper left of the image. Then each pair of opposite edges is sewn together forming a segment of self-intersection. Since there are only crosswise connections made, the constructed surface is called a crosscap, which is depicted in the upper right.
The segment of double points terminates in two so called pinch-points or branch-points (A and B). This type of singularity is called a Whitney umbrella, they occur in pairs. A neighborhood of point A is shown in the lower part of the picture. 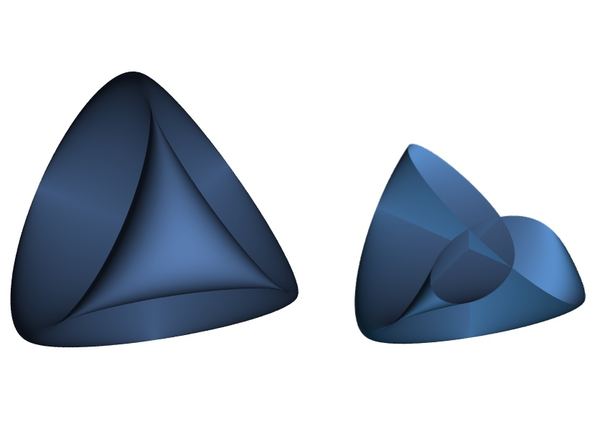 This shape was discovered by Jakob Steiner. While he stayed in Rome in 1844, he studied its geometrical properties - hence it is called Roman surface. However, it was his friend Karl Weierstraß, who first published a paper on the surface and Steiner’s results in 1863, the year of Steiner’s death.

There are three segments of intersection, which consist of double points and an ordinary triple point in the middle, where all three segments intersect. The end points of the self-intersections are Whitney umbrella singularities. 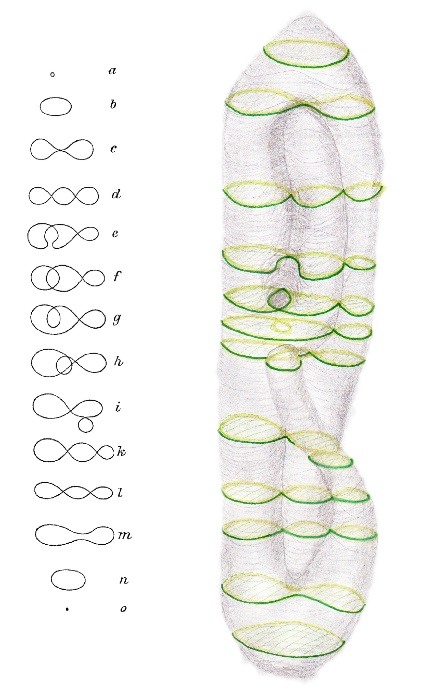 David Hilbert was convinced it is impossible to immerse the projective plane in common Euklidean three-dimensinal space, because he could not see how to eliminate the Whitney umbrellas, and he asked his student Werner Boy to prove it. To the surprise of his teacher, Boy constructed a smooth immersion in his doctoral thesis in 1901. He described it by giving the corresponding curves of its intersections with a family of parallel planes (see the left part of the picture, taken from Boy’s thesis). The right part shows a spatial version of Boy’s surface indicating the planar intersection curves. 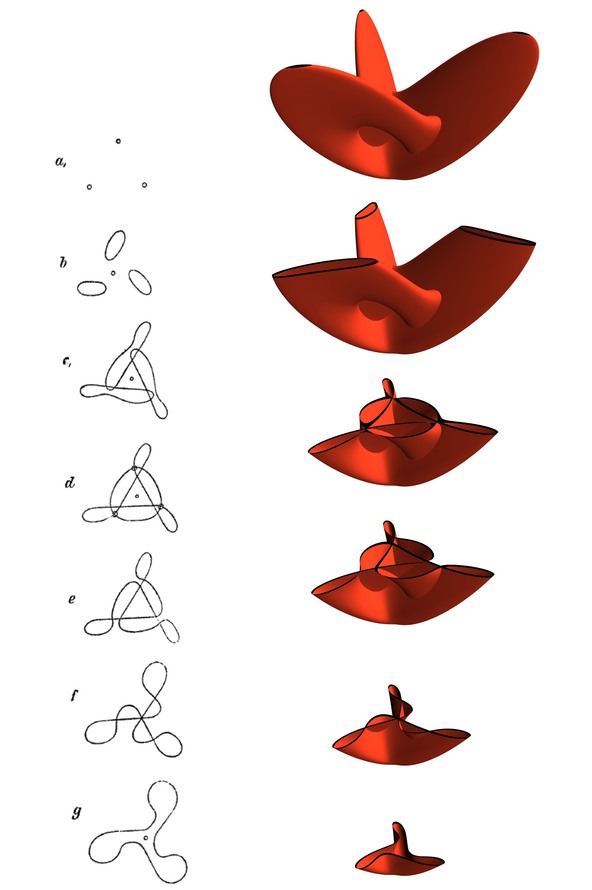 Boy’s first surface can be deformed into a three-fold symmetrical shape. So Boy constructed a second surface and again described it by giving its height levels, which can be seen in the left part of the image (taken from Boy’s thesis). The right part shows a spatial version cut at similar levels.

The formula is taken from:
François Apéry. Models of the real projective plane. Vieweg, Braunschweig / Wiesbaden, 1987. 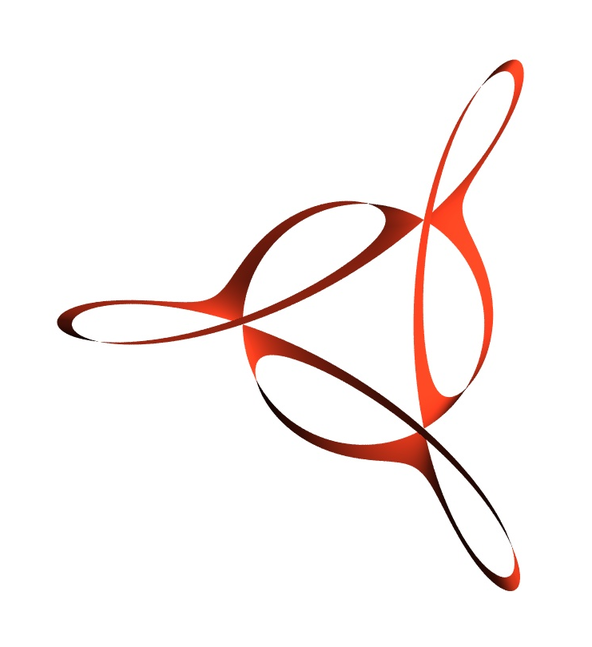 This is a slice of Boy’s second surface. Three saddle points can be identified. 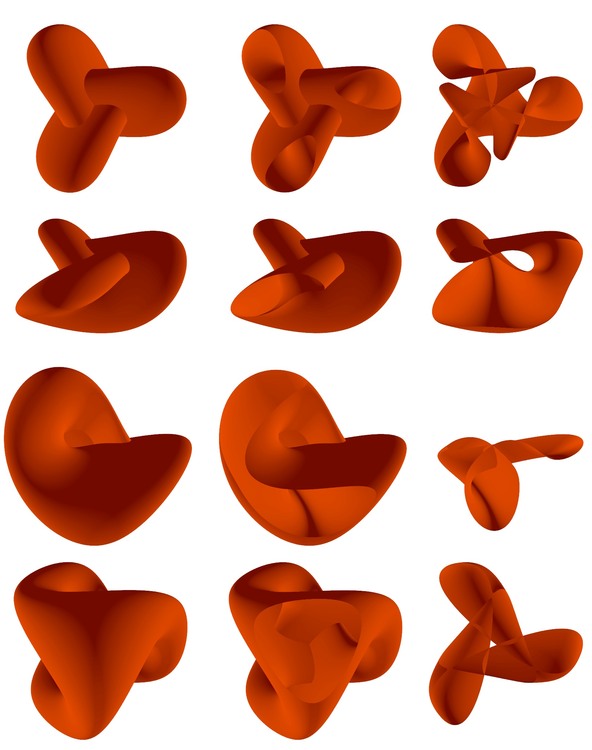 different views of the Boy Surface

Each row of pictures shows the same perspective of the surface: in the first row it is seen from a point of view on the negative z-axis (for all 12 pictures the x-axis is situated horizontally in the paper), in the next rows the surface is rotated around the x-axis by 60°, 120° and 180°. In the first column the surfaces are shown uncut, the second column depicts each view of the surface cut by a plane normal to the viewing axis leaving only the part further away from the viewpoint for display (which includes the origin), for the pictures of the third column the cutting plane is moved to the origin and contains the x-axis. The lighting stays the same for all 12 pictures with respect to the viewpoint. The first and last figure of the third column are exact opposites of each other and can be glued together to form the closed Boy Surface.

The formula is taken from:
François Apéry. Models of the real projective plane. Vieweg, Braunschweig / Wiesbaden, 1987.

The (second) Boy surface can be cut into three mutually congruent pieces because of its three-fold symmetry. The picture shows the surface using a parametrization by Robert Bryant and additionally the same surface cut open and fallen apart to demonstrate the symmetry as well as the beauty inside. 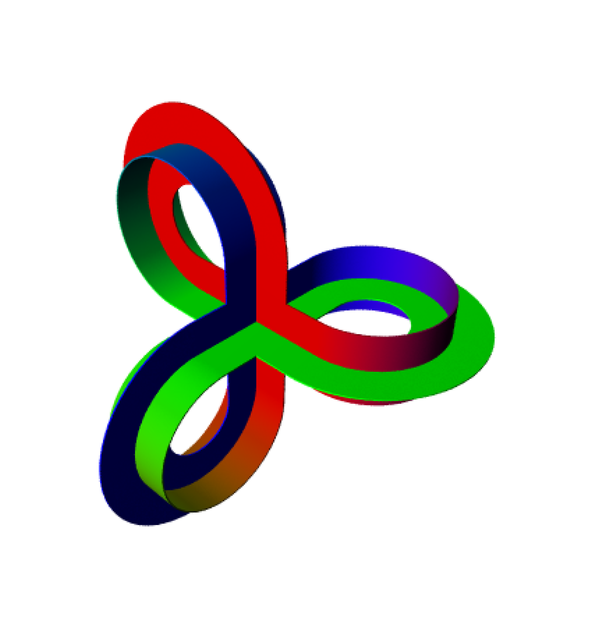 The Boy Surface is a self-transversal immersion into Euklidean three-space. Hence, there are as many different tangent planes in a multiple point as there are preimages of that point. Triple points of self-transversal surfaces are isolated, Double points occur within curves, which are either closed, extend to infinity, terminate at the border or end in Whitney umbrellas.
The picture depicts the neighborhood of the self-intersection curve of Boy’s second surface, which is shaped like a three-bladed propeller. The colors where chosen to better distinguish the intersecting sheets of the surface, even though they all belong to the same surface. 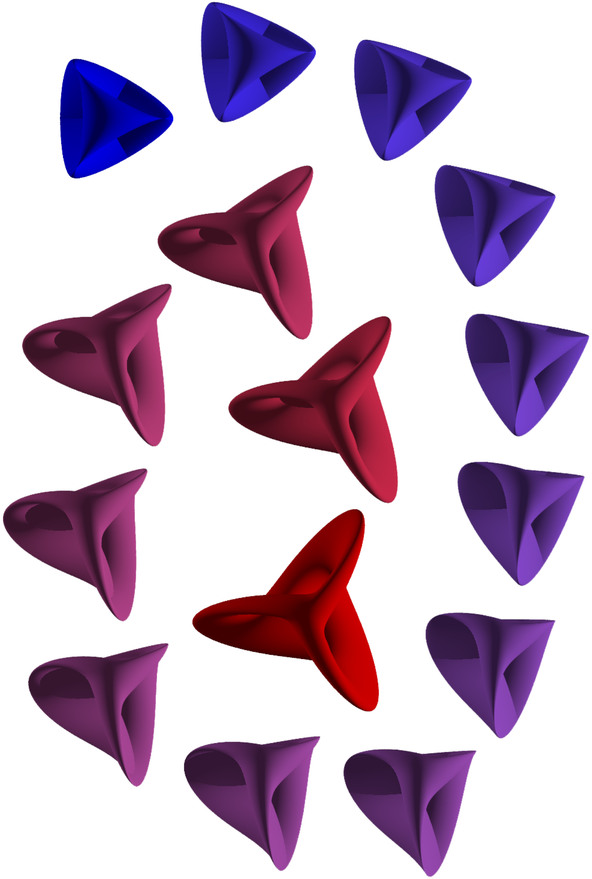 It was Bernard Morin, who first thought of a transformation from the Roman surface to the Boy Surface by eliminating the six Whitney umbrellas in pairs. François Apéry gave an exact homotopy. The triple point and the axis of three-fold symmetry stay fixed throughout the metamorphosis. 15 stages of the deformation from the Roman surface (depicted in clear blue) to the Boy surface (depicted in clear red) are displayed.