Man Ray–Human Equations: A Journey from Mathematics to Shakespeare explores the intersection of art and science that defined a significant component of modern art at the beginning of the 20th century. The exhibit Formula Morph from the MoMath museum in New York, which is based on the SURFER exhibit by IMAGINARY, is part of this exhibition!

Working in Hollywood in the late 1940s, Man Ray (American, 1890–1976) created the Shakespearean Equations, a series of paintings that he considered to be the apogee of his creative vision. Drawing on photographs of 19th-century mathematical models he made in the 1930s, the series was a culmination of 15 years of exploration of the theme in a variety of mediums.

Man Ray–Human Equations displays side-by-side for the first time the original plaster, wood, papier-mâché, and string models from the Institut Henri Poincaré in Paris, Man Ray’s inventive photographs of these unusual forms, and the Shakespearean Equations paintings they inspired. Placed in context with his other paintings, photographs, and objects, these works illustrate the artist’s proclivity to create art that objectifies the body and humanizes the object, transforming everyday materials into novel forms of creative expression. The exhibition’s diverse works—including 70 photographs, 25 paintings, eight assemblages or modified “readymades” by Man Ray and 25 original mathematical models—juxtapose the artist’s Surrealist-inspired photographs of mathematical models and the associated Shakespearean Equations within the larger context of the role of the object in the artist’s work. His other canvases, photographs, and objects—some celebrated and others little-known—link his wider artistic practice with the Shakespearean Equations project and casting these accompanying works in a new light.

A special version of the exhibit Formula Morph, developed in collaboration with the MoMath, is shown at the exhibition.

The exhibition is organized by The Phillips Collection and The Israel Museum, Jerusalem. 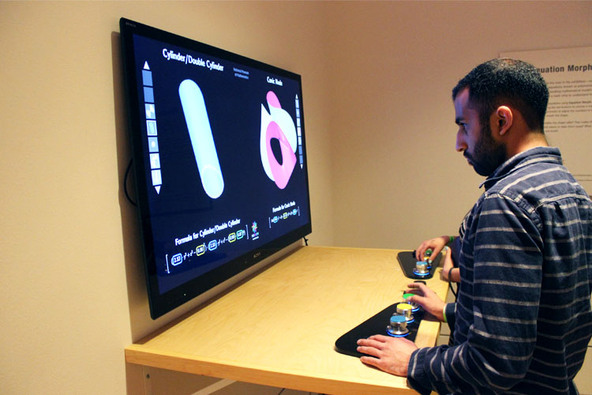